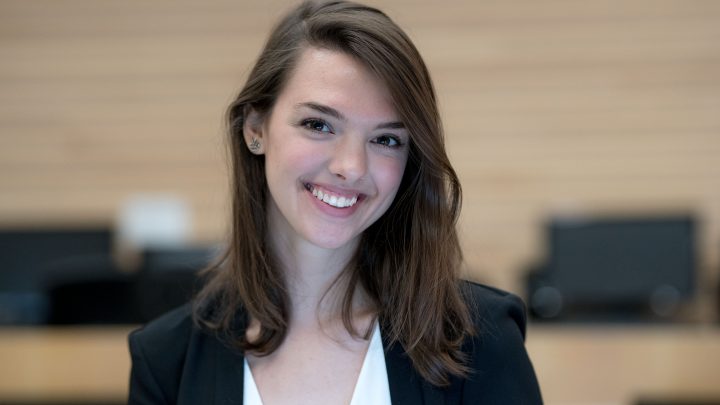 Tell us a bit about your start-up, SkyVolt, and how it came to be.

I’ve always had a very strong calling to make the world a better place, and climate change is our generation’s biggest problem to solve. I’ve been inspired by Tesla since the Model S release in 2012, and it was always my dream to work there. As graduation approached, I felt frustrated that I had to leave my friends, family, and Canada to pursue meaningful work. I was always interested in entrepreneurship but figured I would probably start a software company much further down the line.

The idea of making an electric plane was originally a hobby project I was tackling with my dad. After telling friends and family, I realized there was a lot of excitement around it. I had a friend who worked at The Forge (McMaster’s business incubator), and she mentioned I could receive funding and support if I developed a business plan. The Forge was invaluable in connecting me with the right people and teaching me about entrepreneurship. That’s when I felt I had a decent shot at making this happen. I had a lot of connections in engineering and the aviation world, lots of energy, and I didn’t care if I looked like a fool for trying something improbable. My goal was to learn as much as I could while working with friends on a really cool project.

I’ve already taken SkyVolt much further than imaginable. Now with funding and an incredible team, I’ve been connecting with people I never dreamed was possible.

You contributed to numerous committees during your time at McMaster. What will you remember most from your extracurricular experiences, such as the IT Student Advisory Committee?

I learned a lot about who I am by joining clubs, teams, and committees and reflecting on what felt most fulfilling within those roles. I learned about my strengths and weaknesses, how to balance between motivating my team and not burning them out, delegating and leading by example, building a relationship with my team, and the importance of professional distance. It was a significant learning experience that I’m grateful I had, so I could avoid making those same mistakes with my own company.

The IT Student Advisory Committee was a fantastic opportunity to interact with university staff, be a student advocate, and see how decisions are made within the IT Governance structure. I’ll always remember my plant chats with Marzena and all the great food at the meetings!

Why did you pursue a career/studies in technology and human behaviour?

My path was certainly not a straight line. I started at McMaster when I was 17, had absolutely no idea what I wanted to do, and changed my path many times. There are no engineers in my family, and I didn’t even know what an engineer was until first year of university.

I had always been incredibly interested in technology. I felt very out of place when I started in social science and very intimidated by the number of credits I needed to catch up on to transfer into Computer Science. I remember walking into the engineering advisor’s office and hearing them say they never had a student switching into computer science from my program.

After I switched, my first computer science class was taught by Dr. Christopher Anand, a phenomenal professor. He let me join his research team and, as my interests shifted towards human-computer interaction and cognitive computing, we had endless conversations about future research projects. He was an influential role model for me and instilled lot of confidence in me. I still volunteer with his outreach program that gives free coding lessons to elementary school students.

Initially, I heard many comments on how combining psychology and computer science is unorthodox—but I eventually convinced a few very technical classmates to pursue minors in psychology. Well-designed products have an intimate understanding of its users and understanding more about how we operate is a huge selective advantage in any industry.

Within the context of the IT/tech industry, how can women help other women?

In my first year of Computer Science, there were only three other girls in my class, and one girl was in all the same clubs and teams as I was. My mindset was that I had to be better than her, but it felt like for every accomplishment I had, she did something twice as impressive. Constantly comparing myself to her was so draining.

I soon realized this mindset was just making me a bitter, jealous person, holding me back from feeling proud of myself, and depriving myself of a great friendship! We’ve since become good friends and constantly push each other to grow by celebrating each other’s accomplishments without jealousy and offering genuine support when we’re struggling. It benefits me so much more to have friends who are inspiring me with their success than to have pride from feeling better than someone.

I think this is a common experience for women in male–dominated fields. It’s not a competition, it’s much more rewarding to lift each other up.

What is one key thing that men can do to be allies of women in the industry?

The celebration of women in technology and introduction of diversity initiatives can be really positive for people like me who were never encouraged to take STEM growing up. But it can also be damaging because it fuels a perspective that women can only participate if the bar is lowered. It’s frustrating to be told that the awards I’ve won or positions I’ve achieved are because the standard is so much lower for women—it strips any sense of accomplishment. I’ve done great work regardless of diversity initiatives.

I had backlash when I decided to major in Human Behaviour instead of Computer Science, and I think that affirmed what people wanted to believe about my technical competency. I still love technology, and I’m still coding and building technical projects. I just wanted to explore a different way of approaching tech. Being supportive of women who want to take an interdisciplinary approach to tech, instead of gate keeping what “real” computer science is, will make new perspectives feel welcome and encourage innovation.

What are some misconceptions that women might have about working in tech?

When I was starting my company, I was expecting to be laughed out of rooms as a young woman with little aerospace or business experience trying to build an electric plane company.

I’m shocked by how nice people have been and how easy it is to find mentorship. For example, I went to an aerospace conference in Germany where I nervously gave a presentation about my start-up. At the end, I was surprised to be approached by a crowd of people offering their encouragement and advice. I had a similar experience at The Forge in a meeting full of aerospace executives.

I used to feel like I had to exude this image of being some all-knowing goddess of code who couldn’t ask for help, but this just held me back. You can ask for help, and it doesn’t make you less of a person. Don’t be too proud to ask a stupid question, and if someone makes you feel bad about it, that says a lot more about them than you. Just laugh it off.

You are the first student to be profiled in this series. What is your advice for fellow students seeking to be leaders in the technology and IT space?

Do things because you’re genuinely interested instead of wanting to pad your resumé or for the status / reputation (these things are a byproduct). Most importantly, don’t be afraid to fail. Regardless of the outcome, it’s the journey that matters, and people don’t talk about you nearly as much as you think.

As part of McMaster’s IT Strategy, stakeholders across the university shared ‘Digital Moments’ – vignettes that capture what technology could look like for Marauders of the future. What does the future of technology at McMaster look like to you?

Community is one of McMaster’s greatest strengths, and with remote learning, I think it’s important we develop tools that more closely mimic the close connections we have on campus. Even after the pandemic, our world will still be changed. We’ll have much more remote work by diverse teams in pajama bottoms and fewer cramped lecture halls.

In many ways, this new world is better for our planet and our schedules, but we also need to be mindful of what we’re not willing to give up.