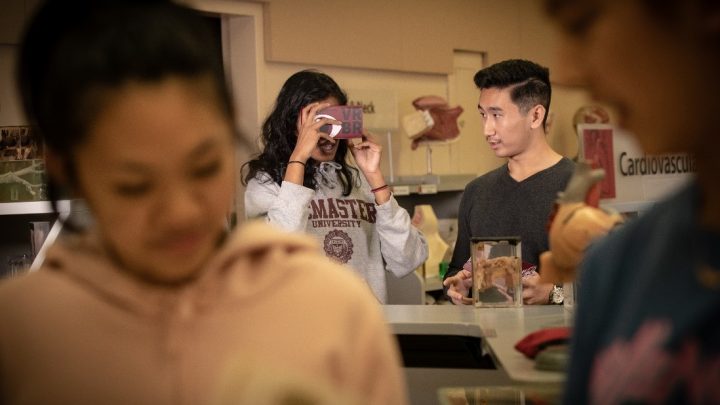 We aren’t ashamed to admit that we look to our peers for guidance, and in some cases, outright follow their lead! The Office of the AVP & CTO chatted with Josh Mitchell, a developer with the Education Program in Anatomy, whose team is exploring the impacts of VR on teaching and the student experience writ-large. Read on to see what Josh has to say…

How long have you been at McMaster for?

J: I started my first year at McMaster Engineering in 2014, and I began working at the Education Program in Anatomy that following summer as a student. This marks my fifth summer at the lab, and my first year as a full-time employee.

What is your role within the Education Program in Anatomy?

J: My official title is Developer, which is vague enough to cover most of what I do. I act as a general IT person within the lab, building PCs and fixing email problems for other staff members. But my main projects lately have been developing VR media and apps, like the Virtual Reality Bell Ringer and an upcoming VR tour of McMaster attractions.

Can you tell us about some technical or creative interests outside of your role?

J: In high school I made short films, that’s where I acquired most of my knowledge of camera equipment. I almost went to Ryerson University for Film, until I decided that would be better suited as a hobby, rather than my career. I also play guitar, and I record music in my spare time now.

How is your team currently using VR in the classroom (and beyond)?

J: Last summer, my colleague Anthony Saraco and I developed the Virtual Reality Bell Ringer, a Google Cardboard-based VR mobile app to help students prepare for their final exam in the undergraduate Anatomy & Physiology course. The app is basically a digital View-Master, delivering digitised versions of anatomical dissections created by David L. Bassett in 1962. These fantastic stereo images were found collecting dust in a closet in the Anatomy Lab, and last year we deployed over 900 cardboard headsets to students so they could learn from these forgotten gems.

How else would you like to use VR on campus? What are some goals for the second instance?

J: I think VR has great potential for McMaster, as a tool for students who can’t physically experience the campus for themselves. When I was choosing which university to attend, one of the biggest factors for me was visiting the campus. This isn’t possible for many prospective students, especially international ones, so we’re hoping that the next few iterations of my current project can help bring the polished experience of McMaster to a wider audience.

Do you have any advice for a group that is exploring and testing VR as an educational tool?

J: First of all, I really appreciate you mentioning testing, as it’s arguably the most important step in the process. Too often I’ve seen companies or institutions touting flashy new educational tools, without actually evaluating whether they improve learning outcomes.

For developers, especially when working with brand new technology, it’s imperative that you make sure it fits your specific needs. Producing a 3D VR lecture for an English course is probably not a good use of your time and resources, and students won’t use it. We chose the specific platform for the VRBR by starting with our final goal, bringing the Bassett slides to a modern student body, and Google Cardboard fulfilled that need for us.

When testing, try to compare apples to apples as much as possible. I’ve seen many “studies” purporting to find great learning outcomes using a new technology, but often they don’t use a comparable learning tool as a control. This renders the findings pretty much meaningless.

One last bonus question… What’s next on the technological frontier?

J: I wish I knew. I hope it’s related to VR, because I’m pretty experienced with it at this point. But the important thing is to be willing to cut your losses if you find a certain technology doesn’t fit your needs. A few years ago we spent thousands of dollars on a Microsoft HoloLens. We published multiple studies with it, and concluded that it just isn’t ready for real-world educational tasks. That sunk cost stung, but it’s better that we learned it now and can move on to bigger and better things.